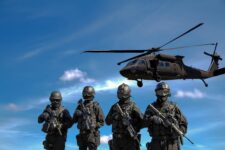 I was interested to find that a former deputy commander for NATO feels the same way I do on more active NATO involvement in Ukraine war. His warning should be taken seriously.

Sir Richard Shirreff, who served as NATO’s deputy supreme allied commander for Europe from 2011 to 2014, told Times Radio on Friday that the Atlantic alliance ”must be ready” for war with Russia as their invasion of Ukraine reaches a tipping point.

The former top NATO official said he does not believe that Russia distinguishes between the supplying of offensive and defensive weapons and that he doesn’t either.

”Weaponry is weaponry. The best form of defense is attack,” Sherriff said.

Shirreff criticized how NATO has handled the conflict thus far, saying that the organization ”must be ready for the worst case” but has not shown that it is.

”The worst case is war, and that means a fundamental mind shift in NATO. Ready to be ready for the worst-case escalation,” the former supreme commander said, emphasizing how the war is an ”existential” battle for Russian President Vladimir Putin and his grip over Russia.

”If he doesn’t win, he’s toast,” Shirreff said of Putin. ”Therefore, the risk of escalation is very high.”

NATO needs ”to be ready for the worst case. Gearing itself up for war, mobilizing, rearming, and putting in place an impenetrable defense deterrent capability from the Baltic to the Black Sea,” he added.

The former NATO commander said cuts in defense spending across Europe were a concern, but most of the chess match depends on preparedness and strategy.

”It’s not too late to start putting what we got out there. And now, I see no sign   that happening,” Shirreff said. ”And then on top of that, of course, we need to be ramping up defense spending … for as long as Putin lasts.”

”There will not be peace in Europe for as long as Putin is in the Kremlin,” he emphasized.

There was a time when you would have not only heard this talk from the U.S. but leading the buildup to make it noticeably clear to Putin, don’t even think about taking on NATO.

Note Sir Richard’s statement about Putin I highlighted in his comments. IF HE DOESN’T WIN, HE IS TOAST!!!   The issue with the decision makers in the West is they can’t put them selves in the shoes of people like Putin or Terrorist. They think a reasonable person wouldn’t think about taking on NATO with the result of the Ukraine invasion, but Putin isn’t Reasonable. So as Sir Richard says PREPARE FOR THE WORST.

My experience with worst case scenario prevention preparation is in 99% of the time you don’t have to use.

I encourage all Americans and freedom loving people do your research and get informed and then act when necessary.