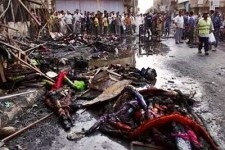 SAUDI ARABIA MESSAGE TO TERRORIST IF YOU TRY TO OPERATE IN OUR COUNTRY WE WILL HUNT YOU DOWN.

Ten years ago the result of the this photo was all to common in Saudi but not any more. Last week Saudi counter terrorism officials from the Interior Ministry arrested 62 suspected terrorist who were plotting attacks in Saudi against locals and Westerners.  Saudi didn’t let political correctness get in the way of stopped those who want to kill them. They just don’t go after them in Saudi but outside also. There is a lot we could learn from them.

You might wonder how I could support them when there are human rights issues there. Yes, I would like to see changes made in things there with women and religious tolerance but there are many things in our country I would like to see changed. But when things are being done positively we should support and use our friendship to share our thoughts on changes. Our foreign policy to many times is using a club against our friends.

When the Saudis saw they were targets of  al-Qaeda they set out to destroy them in Saudi and  they did. But it didn’t stop there for they have continued with a prevention policy to stay ahead of the terrorist. Unlike us in to many cases as time goes by we forget, get busy with life and drop prevention while our enemy prepares to strike again.

Saudi Arabia, in the way they work, has dismantled a “terrorist organization” that was plotting attacks against government installations and foreign interests, the interior ministry announced Wednesday.

Authorities have arrested 62 suspected members of the group, among them three foreigners, the ministry said in a statement carried by the official Al-Ekhbariya satellite channel.

Those arrested include 35 Saudis who had previously been detained on security-related allegations and released, it said.

Members of the organization have “links with extremist elements in Syria and Yemen,” it said, adding that authorities are still hunting down 44 others whose names have been submitted to Interpol.

The interior ministry in March published a list of “terror” groups, including Egypt’s Muslim Brotherhood, Al-Nusra Front, which is Al-Qaeda’s official Syrian affiliate, and the Islamic State of Iraq and the Levant, another jihadist group fighting in Syria and Iraq.

The ministry has said it will prosecute anyone who back such groups “financially or morally”, or who seeks to promote them in the media and on social networks.

It also forbids “participation in, calling for, or incitement to fighting in conflict zones in other countries” as well as calling for demonstrations or taking part in them.

After a wave of deadly Al-Qaeda attacks in the kingdom between 2003 and 2006, Saudi authorities cracked down on the local branch of the group founded by the late Osama bin Laden, himself Saudi-born.

Members of that group went on to merge with Yemeni militants to form Al-Qaeda in the Arabian Peninsula, which is based in Yemen and seen as one of the network’s most formidable affiliates.

Some times we forget that we can learn from others even on areas we think we  are more advanced in.

Until Next Time be Safe: