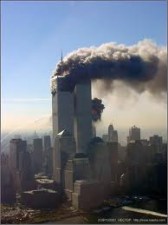 Are we really winning the war on terror? Are terrorist acts only violence or are there other acts just as deadly?

When we think of terrorism we usually think of an explosion where people are killed, this photo will be etched in our minds for ever,

and injured and the terrorist use the old thought of “Kill one Scare a Thousand”. But I believe there is another results which the terrorist work to achieve and that is economically and this can be just as effective over time as a violent attacks.

I believe that one of the purposes of the 9-11 attacks was to cause fear and to hit the U.S. economical I don’t think they thought they could bring the towers down. The destruction and killing of over 3000 Americans in one attack was spectacular successfully for the terrorist but the results for the terrorist didn’t sop there. In fact they are reaping the result of 9-11 every day as they have caused us to change the way we live and the vast amount of money we have spent and are continuing to spend.

Consider the fact that we have spent over a trillion dollars on the wars in Afghanistan and Iraq and add to that the billions spent by the government in new programs at home in the Home Land Security area and that is growing daily. If you add to that the amount spend by the private sector and other countries of the world the benefit to the terrorist keep paying every day.

Another factor in all the funds spent on fighting the terrorist is that domestic programs have been cut or eliminated and deficits have risen to the breaking point in many countries not entirely due to security cost but when you had this cost to the runaway spending by governments then a collapse in coming.

We have to get smarter about how we fight terrorism so our resources are spent effectively and this will only happen if we elected the right officials to represent us no matter what country we live in. Instead of being part of the problem lets become part of the solution by finding out what those running for office really believe and elect those who get it right.

Until next time Be Safe.