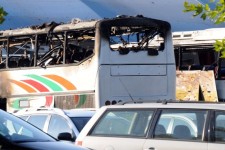 WHAT IS THE OBAMA ADMINISTRATION THINKING?

This out of touch with realty administration we elected again excluded, photo of bus bombing killing Israeli tourist today in Bulgaria,

Israel from a second Global Counter Terror forum the first in Turkey and now in Spain. That Obama and Clinton would allow the exclusion of any democracy and victim of terrorism does a great deal to legitimize the very terrorism that the white House says it is against.

The big question is how can there be a counter terrorism conference when the countries don’t agree on what terrorism is. Michael Rubin recently put forth a definition for terrorism; terrorism is a tactic of choice for state sponsors and rogue groups when its ability to achieve political aims outweighs the costs. The lack of consensus over the definition of terrorism complicates the fight against terrorism.

Too many countries take the approach in which they condemn all terrorism except when conducted in pursuit of causes for which they agree. As is the case with many of the countries that come to us for financial help to supposedly fight terrorism in their countries and we see helping them being in our National interest. But many of these countries such as Turkey, Pakistan and others use a selective approach to stopping terror groups from operating within their countries turning a blind eye to those they agree with.

Before we give aid to any country to fight terrorism we should demand they agree on a definition of terrorism and agree to stop all forms within their country.

The U.S. has been a Global leader prior to Obama becoming president and now he is taking us to a global follower and trying to be all things to all people. And one way the Obama administration is pursing this new policy is to abandon our friends with Israel being at the top of the list. The stupidly of excluding Israel, who has suffered the most from terrorist, from tools to fight terrorism in an united way is total suicide for the U.S.

We will look back in the future as see what happened to our country in 4 short years and if we don’t make changes in November the worst is yet to come.

Until next time be safe:   Phil Little