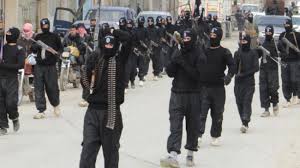 ISIS:  THERE IS AN OLD SAYING: THE WORLD HAS GONE TO HELL IN A HAND BASKET.  Sounds appropriate for today.

As I prepare for a terrorism briefing on Thursday by reviewing the state of the world relating to violence and terrorism I was quickly drawn to the ISIS take over of a large part of Syria and Iraq as well as threatening other neighbors. What we have allowed to develop, by our weak and ineffective foreign policy,  is a replay of Afghanistan  and the build up of Al-Qaeda leading to 9-11. What happened in Afghanistan giving a safe haven to Al-Qaeda will Happen in Iraq with ISIS having a safe haven, their own Territory to arm and train and launch to the world. And they will if we don’t stop them.

In the lead up to attacking Al-Qaeda after 9-11 part of the reasoning was to take away their safe haven to arm and train. It appears the current administration has a short memory or could it be selective memory when it doesn’t fit their politics. What ever the reason not acting to stop ISIS will lead to another 9-11 which will probably be much worst with the tools ISIS has.

Will the current President find himself in the place that former President Bill Clinton finds himself now with his own statement that he had to chance to take our bin Laden before 9-11 but didn’t due to a possible civilian casualties of about 300. Instead he choose not to act and instead had 3000  casualties on 9-11. Of course the 300 civilians were important but in war particular when the enemy puts civilians in arms way we must make the hard choice to protect our citizens.

The rise of ISIS had built some very interesting alliances. Because ISIS is a very, very radical violent Sunni group aligning with the likes of the Muslim Brotherhood Saudi Arabia is apposing them for they know that the Saudi Royal family is in their sights. High on the targets to bring down for ISIS is Saudi Arabia.

So in light of that the Saudi’s have developed stronger ties with Israel and are working with them to control Hamas anther Muslim Brotherhood off shoot. They also are working with Israel on containing Iran. Another part of this relationship building is the realization by both Saudi and Israel that when the chips are down they can’t depend on the U.S. to have their backs.

When we had the opportunity last year to stop ISIS we didn’t and now the window to stop them without a massive ground force is closing quickly.  The only hope is to start air strikes on all their forces and bases hard and fast, with no let up until they are eliminated. This is something that this administration hasn’t shown they have the will to do.

Will the current President after he has left office find himself saying as Bill Clinton did last week, I had the chance to stop them and didn’t. Of course if ISIS has there way their flag will fly over Washington and the former President wouldn’t have the freedom to give interviews.

Hopefully the American people will wake up and as the saying goes “Throw the bums out of office” hopefully it won’t be to late.

Keep the faith we can still make a difference,.