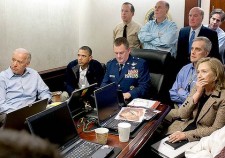 When I heard about this it sent shivers down my spine as I remember a novel I read several years ago about an inter country counter terrorism  force which was put together because the fight was to big for one country. Of course it would be under UN control; can you imagine the Navy Seals under a foreign command which was what the novel was and it was being used to seek world control.

Date line now, Turkey and USA Create Global Counter-Terrorism Forum and from the forum the next step is a force to back up the UN forum mandates. More then 30 countries have joined at this point and the co-chair with the US is Turkey an interesting mix since they are becoming very anti Israel and moving closer to Iran.

Secretary of State Clinton said the network of Counter terrorism which would be nimble against the opponent and would own the choices or decisions. As in the novel this secretive group answered to no one and with the wrong person in charge they could seek to bring down our way of life. Mainly Freedom.  Clinton goes on to say that so many innocent people have been injured by terrorism and no country could single-handedly defeat terrorism so the Forum will offer an unique international place for global counter terrorism.

I agree that no one country can defeat terrorism on its own but you can work together without turning control of your forces over to the UN. What they are saying this week is the same reasoning the bad guys of the fiction writers plot of years ago said.  The plot of the fiction didn’t turn out well for the US lets hope some body comes to their senses before this gets under way.

Could you image this group being under the control of the UN who would say who, what, when and where. Sound for fetched? Look around at what is happening around the world as the problems get worst and governments don’t have answers for their people.

Be watchful, stay informed and be involved. Until next time Be Safe.