The photo of Syria shows the area of the country that is in the middle of the battle for the major cities and one that the Syrian government was losing.

This photo is of Iranian forces arriving by the thousands to support the Syrian army with more to come.

I had said in my last post a few days ago that with Russia in Syria the game had changed and would be changing fast, I just didn’t realize how fast. Now we have a force that will approach 200,000 between the Russians, Iranians and Cubans to join the fight with Syrian forces. If this keep up their won’t be any room for the terrorist or any what is called freedom fighters. But hold your seats China also wants in and has  approached Iran about ties and support. HOLD ON THE TUBULANCE IS GOING TO GET ROUGH.

I am saddened every time I think of Syria and its current situation. Not unlike Lebanon and its decline from the Paris of the Middle East. Damascus with all its centuries of history as well as other parts of thousand year old treasure being destroyed by the radicals. Lebanon could of been helped if we would have had a different foreign policy and with the case of Syria our current administration can assume full responsibility for the fall of Syria.

The current administration has backed out of any responsibility and probably made it nearly impossible for the next strong leader as President to turn it around without war. I watched from my time on the ground in the Middle East, starting in the 70’s, as we blundered when Hafez al Assad played chess with us wanting to be counted in the power structure of the Middle East. He was a master at the game and starting using the East as a chip thinking and hoping the west, Americans, would offer him some carrots to come into the West Camp.

It didn’t take a master at foreign policy to see what was going on particular if you spent some time on the ground listening and talking to the right people. I suspect not one of the so called experts on the region spent any time on the ground and if they did It was short. The kind of diplomacy needed was not learned from a degree or a book, it is like intelligence you need time on the ground getting an  understanding of the people, how they think and what they react to. The current administration like others show they don’t understand that this part of the world responds and follows someone with power who shows and is willing to use it if required.

Many are asking the question why now? Why did Putin respond to the long standing request from Syria and Iran to enter the battle. I think there are several reasons. First Russia needs the warm water port that they have had in Syria and if the government falls then they would be out. Putin will not give up the warm water port!!!

Secondly he saw the opportunity to move due to the weakness of the American Administration and the lack of back bone the Europeans have, ie their lack of response in Ukraine.  Yes, there were sanctions and I laugh when I hear Obama talking about how this had hurt them, when in reality it has been the decline in the price of oil that has caused their problems with their economy.

Thirdly he wants to be part of the decision making in world affairs and one thing he understands is that the world respond to a leader who is powerfully and does what he says. Putin has shown that not only he understands that principle but acts on it. 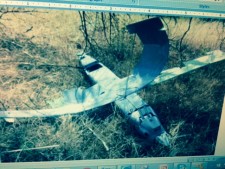 This photos is of drone shot down by Turkey after it crossed into Turkey air space. It has the markings of being Russian. Soon after Russia set up a communication line to Turkey to try and head off more problems since  their jets have violated Turkey air space.

The skies in Syria are now crowed with Russian, American and Syrian jets as well as drones from all three as well as Iran. One little mistake when a Russian jet locks on an American or Turkish jet and they fire thinking they are going to be targeted. Russia fully understands the ramifications of that with both being a part of Nato.

Russia also under stands the dangers of an attack from Syria or Lebanon on Israel. Recently when Bebe Netanyahu went to Moscow with his foreign minister, military and intelligence team if Putin wasn’t sure before he was after that meeting. Bebe make it clear that any violation of Israeli air space or missile lock on would be met with quick and strong force.

Israel and Syria leaders are somewhat in the same position, their backs to the wall. Bashar had a couple of options, leave the country and look for a safe haven or make a pack with the devil. He choose the latter putting his future in the hands of Russia and Iran two really trust worthy partners. I have written early about the end game of both.

Bebe has the same dilemma with either waiting for a Nuke attack or preempting one by striking Iran with military force. The meeting with Putin brought Bebe some time because it is in Putin’s interest to not take on Israel at this time. Just as he knows Obama will back down he knows Bebe will strike hard and fast and Bebe went to Moscow to reinforce that.

Israel desperately needs a secularly Syria and for all the talk Bashar has had a hands off policy towards Israel and some of the reasons Israel had for attacking the plants in Syria were out of Bashar’s control. Notably there was no response from Syria when nuclear plant was taken out. With Putin giving assurance’s to Bebe that he would not allow the Syrian problem to spill over into Israel gives some breathing room for Israel to focus on Iran and its Nuke plans.

Unlike Obama and probably Putin, Bebe understands the historical as well as Bible history of the past and knows it is only a matter of time until Putin and friends turn their attention to Israel. None us know how long that can be, it could be years or it could be much shorter. I would suspect from what we are seeing happen, in days or weeks that in the pasted would have taken years, they might want to have their bags packed for quick unexpected response.

With China making moves to join Iran and Russia it not only shows how difficult getting the U.S. presence restored will be, but the big stickler in all of this is the debt we have to China. With both Russia and China making moves to corner all the Gold on the world market they can as well as buy up natural resources for the future we could have bigger problems. China is already makes moves with the Yen away from the dollar with Russia also pushing for the dollar not to be the world currency. Russia and China are working to weaken us and Obama has fallen right into their trap.

I am reminded of my friends in France who back in the 80’s told me that the only positive of having a socialist government who buried the country was that they would be kicked out in the next election and not get back in for as least 50 years. Time for that generation to die off.

Over the last months of the Obama term we will see Putin and Iran ramp up and go for the gold trying to get a bigger foot hold prior to the next election. Don’t be surprised at some of the moves they will make for when a nation is showing weakness as we are the wolves circle their prey.

This is not the time to give up but to keep the pressure on our elected officials, the White House is not going to change, those in congress who we put there. Work for the right candidates who are protectors of our Constitution and freedoms we all enjoy.