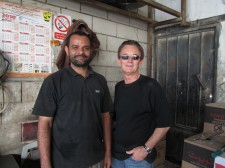 There is a lot going on in the world. We have the Narco-Terrorist in Mexico, the Islamic Terrorist groups around the world, the world cup starting today and now  the strikes across Europe.

I think the most dangerous and unknown for us is the strikes in Europe against the cut backs in government spending. This is a golden opportunity for terrorist groups to infiltrate and get lost in the crowd and use their suicide bombers or plant explosives. They also use the opportunity to stir up the crows to react violently. We have to be on high alert and now more then ever we need strong preventive forces to find out what is being planed and to stop it before it occurs. Of course those on the LEFT fight these tools with everything they have and in doing so expose all of us. Be alert for the loud voices who try to destroy preventive law enforcement and raise yours against them.

For the last 10 years I and my team in Mexico have been talking about the drug dealers and the terrorist linking up to support both their causes. We have seen that happen and the results has been 1000’s of deaths. It is going to get worst unless the Mexicans take the approach the approach the Saudis did and that is to crush those who want to destroy their country. They did it with out  mercy for the terrorist had showed no mercy as they killed innocent men, women and children

I will be going into more detail on our soon to be published Terrorism Update, check our site and click on the button. Talk to you soon.