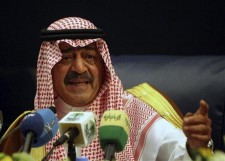 Who is the next King of Saudi Arabia will it be Prince Muqrin?

Over the last twelve years I have been in and out of Saudi Arabia on a regular bases with an office in Riyadh for many years. From contacts with Aramco and many ministries I  have build deep relationships with many who are like family and they come from all walks of life. Royal family, government, police and military.

One family who I have come to know and appreciate is the Al-Tuwaijri family with a long history of service to Saudi Arabia and the world. The father of the family, Abudlaziz, was taped to form the Saudi National Guard at its founding and and after his death one of his sons took over the guard. Some of my favorite times in Riyadh are spent with the Al-tuwaijri family on Fridays night at their compound.

There is a lot twitter action going on around another Al-tuwaijri son, Khalid, who is president of the Royal Court and the gate keeper to the King. It has been said that when the King turns his head Khalid is there to tell him which way. How did the Al-Tuwaijri’s gain this power.

It goes back to the father, Abdulaziz, who was a skilled man who not only was a trusted part of the Royal Family but became very close to a young Prince Abdullah and was very important in his life when he became Crown Prince.

It is been said that Abdulaziz helped shape the young Prince Abdullah to become King. Abdulaziz was pro western and as the head of the national Guard had gained respect of foreign military including the U.S. He was the first to step up to support the first President Bush in the Gulf war. (That is a story within its self.)

So it was logical when Abdulaziz died that now King Abdullah still wanted the wisdom of an Al-Tuwaijri beside him so named Khalid as an adviser. On June 26, 2011 he combined the Court of the Presidency into the Royal Court naming Khalid president of the Royal Court a Ministerial rank.

It is has been said that the moderate moves of King Abdullah to open up the country was encouraged by the Al-Tuwaijri’s. This includes education both domestic and foreign, women’s rights, religious tolerance and moving the country into a more modern age which will be forced on them if they don’t take the initiative.  There is to much background to put in this posting but I hope this gives you little insight into what is going on that will effect the future of Saudi.

To many in the Royal family, particular some Grand Children, feel that Khalid has gotten to much power and they are being moved aside and will not have the opportunity to rise to power. So this latest twitter battle trying to discredit Kahlid is about power. Recently Kahlid who is very seldom seen and heard from took to twitter, his first post since joining in 2012, to ask Saudis who had problems to let him know by twitter. The custom in Saudi is for a Saudi citizen if they have problems they can come to the king and ask for help by appearing personally or writing the request. Khalid is trying to make the process easier for the people, some don’t like that.

Also Khalid is thought to have been involved in the naming of Prince Muqrin as the second Crown Prince which puts him in line to be King. His mother who was a Yemeni concubine is a problem for some.

Through all of the recent moves you can see King Abdullah moving to solidify that his reforms will move forward after he is gone. Also you can see his purpose of solidifying Khalid Al-Tuwaijri’s position to ensure that a Al-Tuwaijri is beside the next King.  The legacy, which is important, of  Abdulaziz Al-Tuwaijri is seeing a more open and reforming society with opportunities for all Saudi Citizens.

How does this effect us and the West? The more stable, open and modern Saudi becomes the world will benefit. I do understand the feeling of many conservatives within Saudi who feel opening to the West will bring the negatives of our society. I wish we could only export our positive qualities, but them we would not be free would we!!

The Gulf is a fascinating part of the world and the more inaction we have will  bring knowledge that we really aren’t that much different. Go for a visit I feel safer in Riyadh then in down town Los Angeles at night.

Until next time be safe: