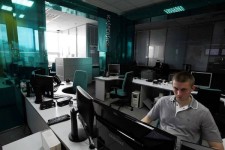 This is the Kaspersky lab in Moscow:

The Kaspersky Lab was asked by the United Nations to try and track down a virus called the Viber when they came across a much more menacing suspect called the Flame. This program left experts all but certain that a government was behind it intent on cyber warfare and intelligence gathering in part because of the likely cost of such a sophisticated endeavor.

The Lab in Moscow said they went into the dark looking for something and came across something different, something Huge and sinister. The Flame virus can copy and steal data and audio files, turn on a computer microphone and record all the sounds in its vicinity, take screen shots, read documents and emails, and capture passwords and logins. They say it is a powerful universal set of tools for cyber espionage.

Many people think that cyber warfare is a myth and a fantasy but as we reassemble and study one by one the numerous components and modules of this unique program it is  seen that it is a real weapon of this undeclared war that is already going on.

One of he dangers of having such a high tech weapon force as we do can expose our systems to being shut down or taken over by the enemy. The task for our government is to understand that the technology to develop virus changes and improves daily so our defenses has to change daily or we will lose this war.

More later on this.