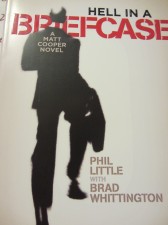 In going through the archives I found this review on my novel  if you haven’t read it I hope you get a copy and let me know what you think. Be safe. Phil

Matt Cooper is a true international man of mystery. A private security executive, his adrenaline-junkie days consist of last-minute first-class overseas flights, Hollywood parties with a live-in actress girlfriend, and direct calls from top CIA brass. But the jet-set lifestyle hardly matters once Matt meets Mr. Roberts, an old broken-down millionaire, an uncommon Christian who coaxes Cooper into traveling with him to Israel. Through the strange man’s incredible connections, Matt goes behind the curtain of Middle East terrorism, witnessing firsthand the untold ravages of holy war.

When I first received this book in the mail and read the title I thought, “What kind of story is this?” Honestly, the title didn’t appeal to me, but the front cover was interesting and so was the description on the back. So I started to read. The first chapter had a lot of narration, which usually makes a book boring, but it seemed necessary to the setting and to get you into the mind frame of the story itself. It must’ve been effective because I found myself wanting to plow through this book from beginning to end. That’s a good sign for me because #1, I normally don’t read thrillers, and #2, I read SO many books that for it to grab me by the throat it has to be compelling. Hell in a Briefcase was compelling indeed.

With pulse-racing countdown to find the nukes before they detonated, continual intrigue, cliff-hanger plot points, a mysterious mole, and adventure up the wazoo, this story was worthwhile reading for me. What a great ride! One of the best points, IMHO, was the fact that I didn’t figure out who the proverbial bad guy was until the end when the person was revealed. Talk about well-done red herrings. This is a perfect example of that technique.

I found the spiritual arc to be very effective and frankly, if there had been no arc, it would’ve taken away from the story, in my opinion. In this story not everyone “finds Jesus” because that isn’t the real world, but the defenses people erected against Christians were very realistically portrayed. One particular person’s influence was dramatic enough to capture the attention of the unsaved long enough to have them wonder if what she had was truly real. That’s a great illustration of living out your faith, but the character did it in baby steps, like new Christians do. I can’t wait for the next book in this series, because there are some very well-done loose ends that could lead into another book, yet I still feel satisfied at the end of this one.

Hell in A Briefcase
by  Phil Little With Brad Whittington

“Reading this book is like downing 5 shots of espresso.”

Nearly a dozen Cold War nuclear briefcases were purchased by a faction of Al-Qaeda, and according to intelligence reports, they’re headed to the United States. Independent intelligence executive Matt Cooper is hot on the terrorists’ tail.

During a raid in Montreal, Matt is overcome with an eerie premonition. His gut wrenches tightly while he drops to his knees, the pavement exploding around him. Agents fire back, silencing the gunfire. Inside the apartment a shocking discovery is made. This was no raid–it was an assassination plot. Taped to the terrorist’s rifle case was a photograph of Matt Cooper.

While Matt is off chasing the bad guys, nuclear fission is building under his own roof between his daughter and girlfriend. Can Matt uncover the mole in his operation, defuse a terrorist plot and preserve his family before he is destroyed?

Little and Whittington paint a very chilling, yet real, picture of terrorists, taking the reader into Iranian safe-houses where such evil plots are birthed. They weave multiple character arcs into the bold fabric of the main plot. What makes this story so horrifying is the plausibility of reading about it in tomorrow’s headlines, and the accelerating pacing of the action. Additionally, frank descriptions of Islamic terrorists and their drive to decimate the “Great Satan” for Allah is enough to keep readers wide awake in the dark of night. Fans of Ted Dekker’s Blink will especially enjoy Hell in a Briefcase.

This tale is not for the faint of heart, or for the blissful peacenic who thinks world peace is a nice chat away. Hell gives one a greater appreciation for the men and women who put their lives on the line protecting our nation.

Enough loose ends dangle at the end of this book for a sequel. Hell in a Briefcase will raise your heart-rate and keep you guessing to the very end. Reading this book is like downing 5 shots of espresso.

Matt Cooper’s life has no “pause” button. CEO of the largest private security company in the nation, Matt’s existence consists of traveling overseas to establish international offices for his company, attending the highest class Hollywoodparties with his actress girlfriend Stevie, engaging in clandestine meetings with informants and covert operatives, and having the ear of the most powerful people in the country. Oh, and dodging the stray bullet or jumping from a car now and then isn’t out of the ordinary, either.

However, deep inside is a man who’s hurting over his wife’s death in a horrible car accident, trying to raise a thirteen year old daughter all by himself, while juggling the security concerns of an entire nation. Matt Cooper may be quick, brash, and mostly fearless, but he’s not invulnerable. Eventually, a shot is going to come that he won’t be able to duck, and that gnaws at him inside. Still, he’s got the lifestyle, the “girl everyone wants” on his arm, and an exciting occupation that’s never boring.Everything changes when Matt takes a chance to scout out potential markets for his security company in the Middle East, sneaking behind enemy lines to take part in a raid that’s part of a Holy War raging for decades. Not only does he see things that change him, make him question his existence and purpose, but also he stumbles upon something more tangible and horrifying – a terrifying nuclear threat to the United States and those he loves, guided by an unseen, maniacal hand bent on destruction and vengeance, a leader caught in the throes bloodlust and jihad.

Time runs out as Matt races against the clock, narrowly avoiding assassin strikes meant to take him out of the game, and everyone becomes a suspect as he realizes there’s a leak somewhere, either in his own agency or higher up. Worse yet, his daughter Nikki is slipping away into a depression she might not survive, struggling with the grief of losing her mother and the fear that she’s going to lose her father as well. Can Matt save the country, his family, and his own soul in time?

Hell in A Briefcase, co-authored by Phil Little, an internationally recognized counter-terrorism expert, and Brad Whittington, author of the Fred, Texas series, is a complexly woven story told in the high-wire suspense fashion of The Bourne Identity series and any number of Tom Clancy novels. The pacing is frenetic, unrelenting, and the writing is brisk, terse, bringing the reader swiftly into the flow of the action. While reading, you get the innate sense of a clock ticking as time runs out, and the action scenes are written believably, which is often hard to do in novel. Hell in A Briefcase would make an excellent transition to the big screen.

Also, as a co-authored novel, there is no dissonance in the narrative, which often marks such ventures when one writer takes over for another (I’m reminded of the Left Behind series, when it often seemed like one chapter was written by Jenkins, the other by Lahaye). Hell in A Briefcase uses realistic, accurate portrayals of terrorism and counter-terrorism, as well as the strife of living in the war-torn Middle East. Matt Cooper is a realistic character when it comes to matters of faith, there is no “pat” conversion scene when abject sinner turns automatically into a creature of grace, he struggles God’s will in his life, as all people do.

For some high-adrenaline action this holiday season, pick up Hell in A Briefcase today.

I hope you enjoy. Be safe. Phil