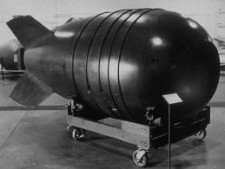 Two years after an underground installation in the city of Qmo was revealed in a joint press conference by US President Barack Obama, French President Nicolas Sarkozy and former British prime minister Gordon Brown, Iran has significantly advanced its uranium enrichment program at the site.

The latest report from the International Atomic Energy Agency, not some anti-Iran group,  concludes that Iran has not only boosted production but upgraded the level of enrichment from 3.5 per cent to almost 20 per cent and has installed more sophisticated centrifuges, which it is moving to the bunker in Qom, apparently to protect them from airstrikes.

Low-enriched uranium is used for nuclear power, which Iran insists is the purpose of its program.Weapons-grade uranium is about 90 per cent enriched.

“We believe if Iran broke out now they could have a bomb in six months,” said David Albright, a former weapons inspector who runs the Institute for Science and International Security in Washington. “They’ve done this right in front of our faces.”

Iran has ignored four sets of UN Security Council resolutions since 2006 calling on it to cease enriching uranium. With the world’s attention diverted by the Arab Spring, Tehran has pressed ahead, overcoming delays caused by Stuxnet, a mysterious computer worm that made centrifuges malfunction.

Greg Jones, a defense analyst at the Nonproliferation Policy Education Center, calculates that Iran could now produce a bomb within 62 days.

“The assumption has always been that Iran would never actually get a nuclear weapon, because the West would have enough advance warning to prevent it either by diplomacy or force, but they’ve kept on pushing the envelope and getting away with it,” he said.

A new report by the Bipartisan Policy Centre, a think tank set up by US senators, warns: “The Islamic Republic of Iran could be a de facto nuclear power before 2011 is over.”

These IR-2 centrifuges have replaced unreliable and antiquated machines.

The new ones, which Iran claims to have developed in its own laboratories, are more reliable, speeding up production.

“I’m very alarmed,” said Nicholas Burns, the US former chief negotiator on Iran. “I’ve read many IAEA reports over the years and they are very carefully written by civil servants. This time they are clearly ringing the alarm bells.”

The IAEA had previously reported that Iran had assembled the know-how to fashion a crude nuclear weapon or underground test device, but lacked a supply of weapons-grade uranium for such a device. The fear was that, at some point, Iran would break out and use a clandestine enrichment plant to make weapons-grade uranium.

This information has been reported in other parts of the world but our press has been pretty silent on this. Many in the intelligence community feel that the Iranians are much further along then our politicians would like to believe and as I have been reporting the radical leaders of Iran, not the Iranian people,  are very good at the smoke screens and diversions to hide what they are doing.

Until next time, Be Safe. Phil