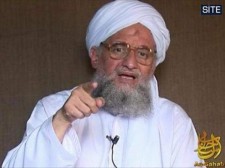 Al-Qaeda tries to maintain its importance by supporting the Arab spring uprising as a way to bring full Islamic law to the countries where there were more moderate governments. Many think Al-Qaeda lost a lot of relevance as a result of the political upheaval across the Middle East and now they are trying to inject themselves back to importance. Al-Zawahiri who was second in command to bin Laden has now taken the reins of Al-Qaeda says the uprising will bring about the establishment of what he called true Islam in these countries. He calls for the over throw of all secular Arab governments and calls this time the “Dawn of Imminent Victory”.  We in the West would be very niave if we think that Al-Qaeda is not active in the rebel groups causing the uprising in these countries and just waiting for the time when they can bring a shift to their brand of Islam.

The second front on events that will effect world terrorism is happening in the Palestine territories with the announcement that Fatah is going to the UN to ask for full membership, which the US has vowed to Veto. The purpose for this move is to put the US at odds with a lot of the world and make them appear to be anti-Arab, also they are trying to get around really having talks with Israel on solving the issues which will give Israel the right to exist.

This move by Abbas is showing the rift that is still in place between Fatah and Hamas as Salah Bardawil a senior Hamas official in Gaza, criticized the UN bid, saying that Abbas has not consulted with Hamas about it. It is very easy to see why the talks with Israel don’t make headway when the PLO side has the different faction who don’t get along. What ever happens in that area of the world will effect terrorism around the world so if there is continued unrest and the attacks on Israel that will feed reactions by terrorist around the world who support the destruction of Israel.

There are many reasons why the elections in 2012 in the US are important and one is that we elect a strong leader who can take us back to the place of respect and leadership in the world. The only hope the  world has in human terms is for a strong US on the side of freedom loving people everywhere and for a leader who will see the importance of a strong military and our financial house in order. In simple terms not spending more then we make. Now is the time for we Americans to get more involved in our government not less as we get distracted by all the problems around us.

Until next time Be Safe.  Phil