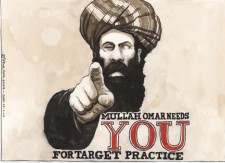 CAN ANYONE REALLY BELIEVE THIS:

Would you trust him

MULLAH OMAR SAYS THE TALIBAN ARE READY TO TALK:

In the past the only way they would talk is if the U.S. pull all its forces out but apparently all the air strikes have payed off and he wants to become like the radicals in Iran talk then stall then you leave we then will take back over. At the same time he is showing willingness to talk he is boasting that the Taliban is growing more familiar with  the U.S. military tactics and gaining access to hardware which is instrumental in causing greater losses to the enemy.

I suspect many in the U.S., notably the left and Obama administration, will jump on this and make a case that they can finally see end of the war in Afghanistan and come up with some deal with Omar and pull out all our forces. Would anyone like to put odds on how long it would be before Omar makes his move to retake Afghanistan and take it back to slavery, particular for women. Of course by the time Afghanistan is back under the Taliban terror Obama and group will be long gone.  It is very interesting how history repeats itself and we can convince ourselves that some how this time it will be different because we are smarter then those of the past.

Remember KNOWLEDGE IS POWER, so keep digging and the truth will set you free.

Until next time; Be safe. Phil