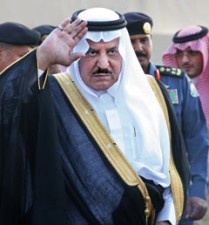 There is a lot of speculation around who will be he next King of Saudi Arabia now that Prince Nayef has been named the Crown Prince. The tradition in Saudi has been for the Crown Prince to become the King when the current King died but will that continue? The past has kept the King in the ranks of the older generation and many, including King Abdullah, have pushed to open up the process and that is why he expanded the selection committee.

King Abdullah has elevated and promoted Prince Bin Nayef, the son of Prince Nayef, who has had the responsibility of riding the country of the terrorist and leading the battle on the Yemen border. Prince bin Nayef is more of a moderate, as is King Abdullah, and he would not only make a great King but would probably continue in the direction of making changes to bring more openness and reform that king Abdullah has started.

Bin Nayef, who has been a great partner,  would continue to be a great partner in the fight against terrorism for the U.S. as King. We will have to wait and see if it is time for change in Saudi or if the past continues.

So will it the Father or the Son?

Until next time be safe: Phil