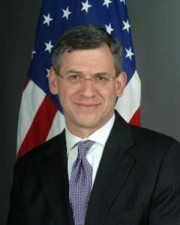 Ambassador Daniel Benjamin will head up the newly formed Bureau of Counter Terrorism.

Which is it? Is the Terrorist threat decreasing or increasing? For the Obama administration it depends on what helps them the most politically and for them it isn’t about what the threat is for the most part they think if we will only be nice to them they will like us. That has not worked out to well for those who have tried it in the past. But remember this is an election year so expect more window dressing actions.

The Sate Department announces the new Bureau of Terrorism described below in their words.

The new bureau will coordinate with the National Security Staff, and other U.S. government agencies to develop and implement counter Terrorism strategies, policies, and programs to disrupt and defeat the networks that support terrorism.  It will also support U.S. counter Terrorism diplomacy and strengthen homeland security, counter violent extremism, and build the capacity of partner nations to deal with terrorism.  At the same time, the bureau will promote American values, including support for human rights, democracy, and the rule of law.(Oh yes and we won’t call them radical Islamic terrorist. Blog comment)

The new counter Terrorism bureau will lead efforts to reduce radicalization and mobilization abroad by developing positive alternatives for populations that are vulnerable to recruitment, and working with partner governments and civil society organizations to build the capacity to counter violent extremism.  It will also work with the recently established Center for Strategic Counter Terrorism Communications to d-legitimate violent extremist teachings.

The Bureau of Counter Terrorism will be the principal State Department link with the Department of Homeland Security, or DHS, on Counter Terrorism strategy and operations.  The bureau will work in partnership with DHS to strengthen international cooperation on a wide range of homeland security issues, including transportation security, the interdiction of terrorist travel, and critical infrastructure protection.

The United States depends on the strength of its partners and allies abroad in the fight against terrorism.  With partners who are able to manage the threats within their borders and regions, the likelihood of U.S. forces being called into action is greatly reduced.  The Bureau of Counterterrorism will work with other bureaus and agency partners to build international partner counter Terrorism capacity in the civilian sector and will contribute to efforts in the military and defense sectors.

Protecting the United States, the American people, and U.S. interests abroad will remain a challenge in the 21st century.  New terrorist threats will require innovative strategies, creative diplomacy, and stronger partnerships.  The establishment of the new Bureau of Counter Terrorism will help the U.S. to meet this challenge.

I applaud any efforts to defeat terrorism but with all the bureaus we have why create a new one of course it does give a talking point for the administration to try to show how pro active they are on world terrorism. For some reason I just have trouble believing them with so many of the past actions being to throw America under the bus.

Lets hope we Americans wake up by November and realize if we don’t solve the debt problem fighting terrorism will be a non starter, this week our debt surpassed our assets and keeps going up every minute of the day.

Until next time be Safe:   Phil Little