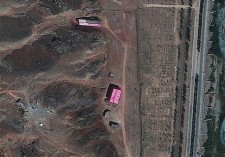 The Iranian Government is putting out very little on the explosion and trying to keep a lid on foreign reports. Some have reported from the ground that there were over 30 killed.

There are many ways to slow down the process for Iran getting a nuclear bomb until the elimination can be completed. As the US leadership follow their misguided steps to a negotiated settlement, which will never happen, others are taking a more direct approach.

I have been reporting on the preparation between Israel and Saudi Arabia and other gulf states to strike military if you US follows the road of appeasement and sign a worthless agreement.

There was a  large explosion near a suspected nuclear site in Iran and has  killed a yet unconfirmed number of people and prompted speculation of sabotage at a military site long suspected of housing Tehran’s clandestine nuclear activities, according Iran’s Defense Industries Organization (DIO), which operates under the country’s Ministry of Defense.

The explosion at a facility referred to as a “production plant” caused a fire that killed two workers, according to Fars, which cited information provided by Iran’s DIO.

Fars first reported news of the explosion, claiming that it took place at an “explosive material factory” near Parchin.

Iranian opposition groups claimed a higher death toll than reported, with some claiming that “at least four military personnel were wounded” in the blast.

The official reports acknowledge that Parchin is a military site, but claim that actual explosion took place at a non-military installation used as a waste storage depot.
The reports referred to a “strong” and “tremendous explosion” that “shook Eastern Tehran” and blew out the windows of a nearby building and impacted about a 10-mile area, according to Saham News.

The report also cites the explosion as taking place near the “Parchin military site,” which has been known to house “high explosives” and other work related to Iran’s nuclear program, according to the Institute for Science and International Security (ISIS).

“The Parchin site is among the military sites of Tehran which produce solid fuel for ballistic missiles without any safety rules and precautions,” Saham reported, according to a translation provided by the Foundation for Defense of Democracies.

There is more to this story then meets the eye and as The West Dillie dally s around and try’s to appease Iran into making a real deal there are those who will continue to act. Hopefully chipping away at the Iranian regimens goals will give time for the people of Iran to rise up and take back their country.

This is something to watch in the coming weeks and months.

Until next time be Safe: