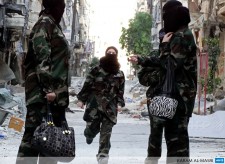 What is causing more Muslim woman to enter the ranks of the terrorist and even suicide bombers. They go through the training as above:

But when activated they take on a different look and at times change into a more western look. The photo below is when they are on attack mode with group.

Much of the Arab world is recognizing the danger of more women entering the terrorist ranks. They can infiltrate where their male counter parts can’t and using their charm they can move freely among especially unsuspecting men. Saudi Arabia is taking action against women with five now on trial and more under investigation. The question is why are more woman moving to the radical side? Is this a way for many Muslim woman who feel held down by their society and the male dominance? Is this a way for them to show that they are equal to the men? As this time we are in goes forward the Arab governments twill have to decide how they are going to confront this growing problem.

This is part of the background on the five on trail in Saudi Arabia four are Saudis and one Yemeni.

The first defendant, currently in prison, was sentenced to 15 years, while the other women were found guilty of luring other women to join the group.
One of the defendants had planned to send her 12-year-old son to fight in Afghanistan after sending her 12-year-old daughter to be married off to an Al-Qaeda member. The woman was also accused of financing several terrorist operations.

Other defendants were also found guilty of plotting to send their sons off to execute suicide operations within the Kingdom.

The leader of the group is facing several charges, including joining Al-Qaeda and inciting dissidence, as well as planning to send her sons to blow themselves up at the Interior Ministry.

The second defendant, who had managed to escape to Yemen while on trial, was charged with financing the group. She is accused of joining Al-Qaeda based on evidence found on her computer, including documents that encourage citizens to fight against the state.
The defendant has also been charged with inciting dissidence and hatred by holding demos and marches led by long-time dissident Saad Al-Faqih. The third woman is accused primarily of inciting dissidence.

The fourth woman, dubbed “Alsheikha” for reportedly being the most hard-liner of the lot, also had inflammatory material on her computer, while the fifth defendant, who is Yemeni, is also accused of inciting dissidence and training her son on how to use a Kalashnikov rifle and revolver, in addition to financing terror.

The Yemeni woman had entered into the Kingdom illegally twice and had covered for meetings between her husband, currently in prison, and armed suspects.

The defendant is also accused of forgery and impersonating her sister-in-law.

The women, who may have a “non Arab” appearance and be traveling on Western passports, have been prepared for their missions by the Yemeni group responsible for the operation to blow up an airliner over the United States on Christmas Day.

Details of the bombers emerged just hours after British spy chiefs raised the UK threat state to “severe” amid fears that AL-Qaeda was planning a wave of attacks against western targets.

Terror experts within the Joint Terrorism Analysis Center, a unit of MI5, now believe that an attack against the UK is “highly likely”.

These woman have had a long history of terrorist activities and the special court in Riyadh has them on trail for the new offenses. It would appear that these woman are being treated as equal with their male counter parts.

The topic about the repressive Muslim society being the cause of the growth of woman in terrorism is an interesting topic, but for another time.