The Gulf states of Saudi Arabia and UAE have gone public with their roles in the attacks on ISIS in Syria. 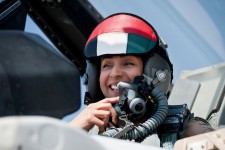 What a great smile!

But not to be outdone was the UAE taking front and center stage by speaking about the UAE first female pilot, and I think probably the only one in the Gulf, Major Mariam al-Mansouri. She was also the team leader of the six F-16’s the UAE sent. I wonder what ISIS thinks of being hit from the air by a woman? This is a good sign for the region and hopefully more countries there will open up to the role of woman in every field.

This story about ISIS, Syria and Iraq is just beginning and I suspect it will be a long time before we see light at the end of the tunnel. I am concerned that all the good intentions of the Gulf States won’t be able to reverse or over come the centuries of hostiles between not only the Jews and Arabs but inter Muslim fight between Sunni and Shiite. But I remain an optimist and a believer in the power of the one true living God. We all can Pray for a miracle.

Until next time Be Safe.