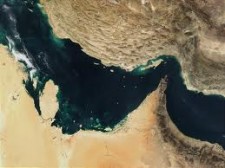 I am on the ground in the Arabian Gulf to check first hand what the security situation looks like and what the future holds.

There are two focus of interest at this time with one being the Iranian Nuclear standoff and the other Syria and they are both extremely important to this region. Saudi takes their security seriously and they have an every increasing security budget fighting the Iranian backed terrorist on the Yemen broader and patrolling the shipping lanes pictured above. We can’t appreciate this narrow strip of water that separates’s Iran from the countries of the Arabian Gulf and the small margin for error that they have as  Saudi F-15’s streak into the air along the Eastern Gulf Coast. With the speed of the F-15 it would not take long to be over Iranian water’s and give them a reason to strike. Iran’s current leadership are masters at diverting attention away from what they are doing to some one else so it is a constant game to keep the pressure on from the air but not give them any reason to act. Most observers in the know feel that this is a time of waiting to see who is going to “blink” first. Hopefully it won’t be the West.

It was interesting to watch the two day visit, the second in a month, by the UN inspection team to Iran supposely for an inspection. This was interesting for Iran had made it clear in advance that there would be no visits to bases but the UN went anyway just to talk and of course no results. When will we get it!! This is the “Master Stall” of the century and we are falling for it.

It appears that the other hot spot is close to falling with Syrian opposition saying that fast approaching is outside intervention as the only solution as talks have failed. They feel intervention is the lesser of two evils. The Arab world for the most part is lining up against the current leadership and King Abdullah let the Russian President know he was out of line for Vetoing the UN resolution without consulting with the Arab countries. In a phone conversation with the Russian President the King was very blunt and to the point, it is very refreshing to finally see a world leader calling them to task for actions that are only self serving to them.  The King also told the President that time for talk was over. Way to go King Abdullah!!

Terrorism is still the issue that dominates the news even out here with the reports full of terrorist attacks killing innocent people everywhere and for us who need to travel and have business in the region we have to be more vigilant and do more advance security planning. We can help with that, contact us to find out how.

Until next time Be Safe.   Phil Little