AM-92 Stinger Air to Air Missile 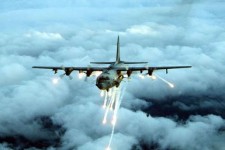 THE ONE THE ENEMY FEARS

One of the deadliest combat weapons on earth.

Keep in mind some in Washington want to moth ball

There is no question that the United States owns the world’s skies and our air superiority is without question. But is it always the best way to fight? The current commander in chief  looking to lead from behind and be defensive and perhaps try hold on to his past remarks that he doesn’t start wars but stops them uses air power even when it will hurt us.

What do I mean by that? If we are taking out Command and Control centers, ammo dumps & equipment, tanks and battle troops then that is the most effective. But when we go after the leaders and key commanders taking them out with a drone only prolongs the fight. How does that work?

If we take out a leader from the air within hours someone takes his place and it goes right on and we know nothing about the cells or their plans. But as the past as shown when we have forces on the ground and we take the leaders captive and interrogate them, off shore in a military setting not as criminals,  we are able to roll up the networks. We learn who is in their network and what they are planning and in many cases we have stopped attacks from these interrogations.

Remember Knowledge is Power, find Knowledge and use it. You and I are stock holders in the largest company in the world. Lets use our voice and voting power.

Until next time be safe;