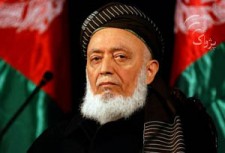 The assassination of Rabbani the head of the peace effort with the Taliban raises questions about the seriousness of the efforts on the part of the Taliban for any settlement. He was killed by a suicide bomber who was supposedly bringing him a message from the Taliban and the attack has the finger print of how the Taliban operates. Of course it could be someone trying to derail any talks. But who in their right mind really believes you could trust the Taliban to follow through on any agreement they might make to get the US to with drawl and they sure haven’t changed their view of keeping the population under slavery and tight control, particular on women.

The biggest loser in all this is President Karazi who doesn’t have many options with all the factions and war lords in the country all who have their own agenda’s. The peace council has made little headway due to the factions even through Rabbani has pushed hard for concessions from the Taliban. Karazi has been very weak on coming down on the Taliban even through many of his close friends have been targeted and killed by Taliban attacks. Rabbani who is a former head of the Northern Alliance, who are mainly ethnic Tajiks, was moving forward even through some former members of the Alliance, mostly southern Pashtuns like President Karazi were pushing to not sell out the Taliban. A mixed bag to say the least.

Rabbani brought a sense of stability to the process and to President Karazi and that will leave a vacuum very hard to fill as most of his fellow leaders of the North are anti-Karazi. A  great sense of pessimism has filled the region with this killing and no one sees a easy way forward with all the factions and for a new leader if one can be found to stay alive.

If history is any indicator of the future we can expect the radial factions in Afghanistan to wear out the “Invaders” wait for them to leave and then bring back their stone age rule. I suspect with our weak leadership that at the first opportunity we will cut and run and then it all begins over again. A safe haven for the terrorist training camps to prepare attacks against us.

Stay informed and until next time Be Safe.   Phil