CHINA MOVING INTO THE MIDDLE EAST: SHOULD WE BE WORRIED 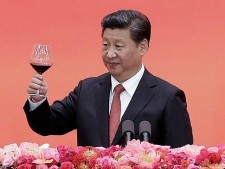 If the following message from China about their intentions in the Middle East doesn’t send chills up our spine then we should spend some time looking at History and what the early record of our world from the bible says about the end times and China’s part in it.

The Chinese government has published an official “Arab Policy Paper” on the cusp of President Xi Jinping’s upcoming Mideast world tour, stopping in Saudi Arabia, Egypt, and Iran, specifying economic goals China has in the region and emphasizing that China is not an interloper in the region.

The extensive paper itself is riddled with vague positive language, heralding “win-win negotiations” and “strategic cooperative relations of comprehensive cooperation and common development.” It makes clear, however, that Beijing is intent on ensuring that a growing population of the Arab world learns Mandarin and does business with Chinese corporations.

“Arab countries as a whole have become China’s biggest supplier of crude oil and the 7th biggest trading partner,” the paper notes, arguing that China has traded with the Middle East for millennia and “both sides have always respected and treated each other as equals and remained brothers, friends and partners no matter what happens on the world arena.” To that end, China reasserts its support for the creation of a Palestinian state and “political solution to regional hot spot issues.” (Remember China is no friend of Israel.)

Nowhere in the paper does the Chinese government mention the Syrian civil war, something of a surprise following a string of increasingly vocal editorials in state publications urging the international community give China a more prominent role in mediating the conflict between dictator Bashar al-Assad, Syrian rebel groups, and the Islamic State terrorist organization, among others. “China is willing to play a constructive role in pushing for a political solution for the Syrian crisis…China’s recent invitations for a Syrian government representative and opposition party representative for talks show not only China’s willingness to promote peace talks and a resolution of the crisis, but also China’s commitment to its responsibilities as a major power, a People’s Dailyarticle argued in December. China has since hosted both representatives of the Syrian government and the anti-Assad coalition.

Syria’s shadow looms over much of the policy paper, however. In it, the Chinese government vows to expand its military presence in the region, (This is note worthy) suggesting that China may finally be willing to play a more active role in the war against the Islamic State:

We will deepen China-Arab military cooperation and exchange. We will strengthen exchange of visits of military officials, expand military personnel exchange, deepen cooperation on weapons, equipment and various specialized technologies, and carry out joint military exercises.

“There has long been criticisms from the West that China is an outsider or a “free rider” in Middle East issues. Those critics may have forgotten that in a globalized era when Middle East issues such as the Islamic State and the refugee crisis spill over to other parts of the world, China, as a permanent member of the UN Security Council, has no reason to put aside the strategic significance of the Middle East,” an editorial announcing the paper’s publication in state news outlet Xinhua boasts.

China has significant reason for concern regarding the Islamic State. The group has begun actively recruiting in China, publishing a nasheed, or jihad song, in Mandarin in December. The Chinese government claims hundreds of ethnic Uighurs from western China, who are a Muslim ethnic group, have joined ISIS. The fact that Uighurs do not speak Mandarin, but the Muslim ethnic Hui population does, suggests that ISIS has its eye on much more than China’s Uighur regions. Islamic State propaganda videos have also demanded jizya, or a punitive infidel tax, from Beijing, and the group boasted of beheading a Chinese national, Fan Jinghui, in December.

President Xi will first visit Saudi Arabia, then meet with President Abdel Fattah al-Sisi in Cairo. He will end his regional visit in Tehran next week. Chinese publications have mentioned Xi’s visit to Iran in the same context as China’s pivot to the “Arab” world, despite Iran being a Persian, not Arab, country. The Chinese government is claiming credit for helping Iran cement its nuclear deal with the West this summer, however, as well as claiming it has a role in repairing the extremely damaged diplomatic relationship between Saudi Arabia and Iran.

This move by China, like Russia into Syria, has been a long time desire but they have been held at bay by a strong America with strong decisive leaders, which has been lacking the last 7 years. They see now is the time to move for they have a year before, hopefully, we will have a strong Commander In Chief who will start the work rebuild American respect around the world.

When I am asked how I see the future of the Middle East, world and our future I point to  watching the “Signs of the Times” to attempt to keep abreast of what the future might bring. None of us know the future but we can wisely discern what is going on and how it fits with prophecy to give us a glimpse into the events the future will bring.

There is much to watch right now as China goes into slow down, the oil price continues to drop and the American stock market slides. All of these creates fear for the future and an opening for all the bad actors to make moves, like Russia, China and ISIS has, to gain more power on the world stage. Every one of these new events going on remind us how important our elections is this fall.

Keep informed, be vigilant and let your voice be heard when miss-information from the left distorts truth and fact.