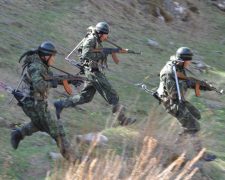 As the Western World has been preoccupied with terrorist attacks and pending financial collapse China has been steadily and quickly building their influence and militarily in Central Asia and the Middle East. There are using their well known slow steady approach to changes in China as well as their goals around the world.

So much of what goes on around the world is affected directly or indirectly by China. The U.S. is effected both ways and very directly on our economic woes.

I might mention a great article in Time magazine by James Grant on the danger of our spiraling debt. What is note worthy is the out pouring of protest from the left leaning press; ironically “Time” is not a center right publication, blasting them for trying to scare the public. They made statements that the public shouldn’t be concerned about the debt that it really doesn’t affect them!! Wow no wonder our country is in trouble.

James Grant the writer of the article lays out the best lay person presentation I have seen so the novice can understand what the effect of the debt can be. I get why the press doesn’t want the public to know the facts for it shows how much damage the current administration has done to our country and our future. The cover of Time show what each one of us owes if we were to pay the debt now. You and I owe $42,998.12 and if we have a family of 4 that gets big. If you goggle Time article on the debt it will come up every American should read this.

How does this relate to China, well they hold a big portion of it and if we rub them wrong they can hold the sale of our debt over our heads to keep us in line with what they want. China differently from us develops a long term plan and stay with it year after year. At this time they are planning out 10-20 years and they are in U.S. and other countries with stable government and property rights buying up all the natural resource deposits they can for the future. Very smart.

I followed China’s interest in the Middle East for over 30 years and recently been writing on it. I have mentioned Stratford Intelligence as being a great resource on world events even if you have your own existing analytic group. I used their insight and reports and on this area I find I am in agreement with their view on China’s move into Central Asia and the Middle East.

“<a href=”https://www.stratfor.com/video/conversation-united-states-role-world”>Conversation: China’s Military role in Central Asia</a> is republished with permission of Stratfor.” 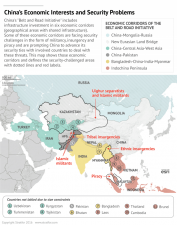 The above lay out of the region points out China’s Economic interest in the area as well as security concerns.

Some of the Stratfor article is below with their take of the region. It is well done I can recommend you sign up for Stratfor for their daily briefing.

Following the collapse of the Soviet Union, an unexplored frontier opened up for China to its west. Central Asia offered Beijing new sources of raw materials and new markets, as well as a major transit zone for exports, to feed China’s growing and globally integrating economy. But China did not have the military means to buttress its economic position, nor did it want to unnerve Russia, a power wary of rising Chinese influence, especially in its former Soviet periphery. With these concerns in mind, Beijing carefully shaped a military and economic strategy for Kazakhstan, Tajikistan, Uzbekistan, Turkmenistan and Kyrgyzstan. Though weak upon independence, the countries retained strong security ties to Russia. Consequently, China opted to promote economic involvement in the region complemented by a subtle, unimposing military engagement, mainly as a courtesy to Russia in exchange for stable Chinese-Russian strategic cooperation.

Internally, China’s economic development was and continued to be skewed. While the east coast industrialized and thrived thanks to its booming manufacturing sector, the western interior remained largely poor and undeveloped. To build up its hinterland, placate its restive Uighur population in Xinjiang province, improve its ties in Central Asia and foster interregional economic links, China sought to expand its economy westward. Not only would the move increase China’s power, but it would also hedge against U.S. and Japanese efforts to contain its expansion east into the Asia-Pacific region.

China worked quickly. Starting in 2008, the country displaced Russia as Central Asia’s largest trading partner and became a major lender and investor, especially in energy. By 2013, China’s trade with the five Central Asian states increased from about $1.5 billion in 2001 to approximately $50 billion, compared with Russia’s $31.5 billion. And even when Central Asian trade fell to $32.5 billion in 2014 because of China’s slowing economic growth, the country still promised the region $64 billion in infrastructure investments. It also announced an additional $46 billion as part of its Belt and Road Initiative, which seeks to build and expand land and maritime energy, trade and transit infrastructure while offloading China’s excess industrial production capacity.

Furthermore, pipelines, roads and rails traversing the region — many built by China — now bring natural gas, uranium and other resources to the country, which increasingly relies on Central Asia as a trade route to the Middle East and Europe. Meanwhile, Russia’s investments in the region have been lacking, and remittances from Central Asian migrants working in Russia have declined significantly, largely because of Russia’s economic downturn and Western sanctions on Moscow. In short, China’s Central Asian economic strategy is succeeding despite mounting domestic challenges related to slow economic growth.

Several months ago I did a post on China and the Silk Road and their move into the Middle East and the President of China’s visit to the region including Iran. In that visit he made it clear they were moving into the Middle East to make influences grow both for economic and military reasons. This Silk Road initiative goes back 20 years and they have slowly and steadily been building the road to achieve their purpose.

It is very easy with all the problem spots of the world for us not to be informed about what the dangers of the world are. For us to be good stock holders, American voters, and elect the right CEO (President) and board (congress) to bring out country back to what it can be.

I was in meeting yesterday with a person who has a background in IT and cyber war fare and has worked to help develop tools to prevent cyber attacks. I made the statement that 30 years ago our biggest concern was an attack by a military in some form on our country. Today I have come to see that is not what we face now and even 30 years  ago an enemy would have not only faced a strong military but an armed America that would have crushed an invader.

Today with the release of the right virus or ability to hack our defense system, financial sector, electric and power grid could bring this nation to its knees without firing a shot. Yes, that could happen and we need leaders who understand that  and commit all the resources necessary to prevent it.

The key to our future is we the people becoming informed will you be one of the informed?

Until next time be safe. Phil