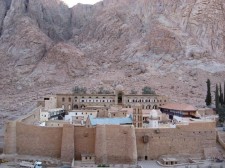 The security situation in Egypt is very violate and was escalated today with the decision by the government in Egypt to prosecute several Americans, one is the son of a White House Cabinet member, who were engaged in non profit work there. The government says they were operating illegally and they have focused on foreign groups who they think are supporting the protesters. The Americans have taking  refuge in the American Embassy as they were expecting some action when the government blocked their ability to leave the country. The U.S. is threatening to cut off the 1.3 billion in aid to Egypt and this will play out for the next days or weeks as the government there makes it point. It will probably end up with the Americans being expelled and Egypt sending a message to others.

Tourist travel has also been dangerous.

Two Americans were kidnapped with their guide when they were coming back from the much visited mount Sinai and the St. Catherine Monastery at the base of the mountain. They were in route with a group back to the resort of Sharm el-Sheikh when they were taken hostage with the Americans being singled out and the other non-Americans in the group were not taken.

The two American woman taken by local Bedouin tribesmen who wanted to exchange them for their tribesmen taken by the government.  The military was able to work out an arrangement where the woman and the guide were handed over to the military.

Just another day in the perils of being an American and traveling,  remember the only safe way to travel is with prevention in advance.

Until next time Be Safe:  Phil Little