THE POLITICAL HATE SPEECH MUST STOP: THE ENEMY WITHIN

I was writing a blog on how the security situation has improved in Mexico with a decrease in violence and the news came across about the political shooting at a Republican baseball game practice.  Could this be really happening in our country like in third world countries?

Let’s think for a minute and my following observation in not meant to be political and would be the same if it was the Republicans attacking Democrats.Today flooding the news is the political types trying to put their spin on it and the far left calling for more gun control as if this was the fault of a gun.

This today is the result of an out of control radical left which is spreading that President Trump and the Republicans are doing things that will literally kill people. They ran clip after clip yesterday of the Democratic leaders stating this as fact, Wow!!!! I watched this knowing that what they were saying was a lie, but there are many followers on the left who believe what the leaders say, the same can be said on the Republican side, or Independent side. These followers feel empowered to go and do something like what happened yesterday.

Now I want to make a comparison to what is happening in Radical Islamic Terrorism, and the root cause that so many in the West don’t understand. The leaders of the radical terrorism start when the children are young and in fact, it is taught in many schools throughout the Middle East that Jews and the West are murders who kill innocent Muslims and they should rise up and strike back. This goes on and on with the leaders speaking hate, directly and indirectly, spurring people to take arms and act.  Become martyrs and have your reward in the afterlife.  The people who respond both young and old do have a mental issue and many don’t have hope and they are taught to listen to what the spiritual leaders say. They don’t do independent study for themselves to find out what the truth is.

Now let me quickly add that I am not saying politicians left or right are calling for martyrs or violence but the hate speech has that effect and we all have to realize, particular if we are perceived as a leader, that we have a moral responsibility in what we say and how we say it. Hopefully, this heinous act will wake up the opposition, to all those in power at this time to honor the American people’s vote and when they voice opposition, to do it respectfully and truthfully.

Now back to good things happening in Mexico:

I have had the privilege of getting to travel the world for the last 40 years and meeting some amazing people all around the world. I have found that we the people are very similar no matter what country is our home. We want and need the same things such as a safe environment to live in, jobs to support ourselves, desire for our children to have better opportunities than we did and to live free.

The thing that has impressed me with many of the countries I have been in how the people are happy with great smiles with so much less than what we have here. I always heard that the best way for our kids to get really educated, to the real world, was to take them on trips to less fortunate countries and to experience how it is to live with so much less.

My business interest has taken me to many parts of the world and one country that is close to my heart is just south of us, Mexico. Oh, the people, the food, the music and to see smiling grateful people with so little brings tears to my eyes. It reminds me that I should be very, very grateful I was born here. Starting as a farm boy from Missouri and given opportunities to follow my dream.

Violence is out of control all around the world, the Bible says when evil abounds so much more will Grace abound and God will raise up a standard against evil and He will use people as part of his tools to push good forward. In evil times can come an opportunity for us to make a difference in helping to bring an end to the violence.

I can see a progression of evil expanding since my first days in law enforcement in the 60’s with an increased fervor the last 15 years that is growing every year. One of the most dangerous things that have occurred is the attempts to destroy our Republic from within by the radical left, all under the guise of tolerant and open to all people, even those who want to kill us.

Mexico has experienced the evil of drug violence and atrocities that most of us cannot comprehend.  However, there is good news as honest, dedicated, and professional law enforcement officials from all levels have risen up to be the standard against violence. There is a dramatic decrease in violence all across the country and I will mention Rosario, just south of Mazatlán, in the center of Sinaloa which was in the news the last few years for its cartel battles and drug wars. That has changed. 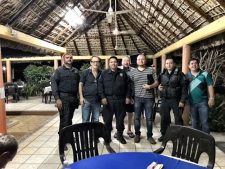 This photo is part of the team, with the commandant who has led the fight over the last two years and has lead the cleanup. As he told me, “As an American, you can feel secure coming here moving and enjoyed the people, food, music, and history.”  We have a business there and I will be spending a lot of time there. I talked to the commander about how we can help them and one of the things was protective gear for their assault teams and officers, we will be helping with that as well as training. It is important that we give back to the places that we are having an opportunity in.

There is so much to do and it is easy to look at the problem of violence in the world and say, “It is too big, why try?” What I believe is that the problem is so big that we can’t miss having what we do make a difference, even if it is something small. Let’s make a commitment that in our own country we will push back against the political hate speech and we will become informed about terrorism, its source, and what we as an individual can do to help stop it.