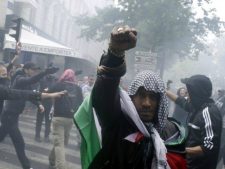 The state of our Republic.

I am not a fear promoter and I operate in a very positive attitude.  But, I must admit that what I see going on in the political world, and with terrorist activities around the world, to say that I am very concerned is an understatement.

I have expressed my concern before about the current brand of terrorism, Islamic Extremists, and their being a grave danger to the world and our way of life that we have come to cherish. Yes, there has been terrorism since the beginning to time and my first book, Hostile Intent, traces the origin of terrorism to its root cause. A variety of religions have used violence, terrorism, to get there way and to hold power but this time it is different.

This current brand of terrorism is messianic with the belief of the extremist that if they start a war to destroy Israel, then their 12th Iman will come out of his cave and help them destroy Israel and establish the world caliphate so they can rule the world. This is their real beliefs; unfortunately, most people in the West do not understand this and they cannot really grasp all that is behind this form of terrorism.  In addition, making matters worse is the fact that too many politicians have been deceived, or blinded by the lies of the terrorists and their blaming America as the cause of the violence.

Add to that the last eight years in America with the left in power and how far and how fast we have seen the world spiral downwards with the press becoming a total tool of the left promoting political correctness. When the United States steps back and doesn’t lead, or tries to from behind the world losses it way and evil raises its ugly head with the radials and tyrants of the world filling the vacuum we left.

In 2003, I was preparing for a youth conference in Germany, with the focus being spiritual.  I found it interesting that I was asked to also speak on terrorism and the dangers I saw to the world. I pondered this request as I questioned myself about terrorism, and its fit into a church youth conference.  The more I thought about it I did see a spiritual side to terrorism and as clarity came I saw that the big danger of terrorism was that it could propel the world to a premature world war. That could happen because of the religious ideology behind the current brand of terrorism with world domination being the end goal and weapons of mass destruction available to terrorist. In the past terrorists, haven’t been as well funded, organized, political savvy and armed with the latest weapons and technology.

Starting in the 50’s the communist knew they could never take down the West, particular America, by military action or from the outside so they devised a new strategy. This approach would take them longer, but they were patient and it would not involve war with weapons. This approach, as we know failed, was to infiltrate people within the societies of the west including the U.S. and allow them to blend, in get educated, run for public office and be in places where they could influence our policy.

This infiltration was also in our intelligence agencies as well as government jobs and they had many people in place by the late 80’s. They failed because the West and their own people turned against a totalitarian government where the people were slaves of the government.

But when one group fails another group looks at their mistakes and reinvent themselves with the same end desire as the Communist. As for back as the 60’s we were seeing this idea of infiltrating by embedding Sleeper Agents to not just commit violent acts, but to become part of the society and rise to power through public office, government jobs, and to effect policy. This intelligence was coming from raids on terrorist training camps in Lebanon from records seized in the raids. This was before computers and thumb drivers so it was in detailed written form and it laid out the plant to soften up the public in Europe and U.S. by using Islam as the highest religion by promoting that they had to defend their prophet and anyone who thought different was a racist.

As Islam spread across the world they would move large numbers of refuges into the target country with them not assimilating into the host country but live with their own customs to themselves.  As they grew in numbers and developed local sympathizers they starting branding anyone who opposed them as racist or Islamophobic in order to get the host country to change to their desire.

This has happened in the U.S though not as rapidly as in Europe. We have areas where the building of political correctness with the help of left lending politicians has allowed the Muslim groups to use Sharia Law over U.S. law to govern themselves. This was the plan from the beginning.  If we do not accept this fact, rise up to stamp out this evil from within we will see our country as civilizations of history, disappear.

There is so much to talk about this brand of terrorism using both violence and infiltration that it cannot be covered in a blog.  But what do we do? Is there hope? Is the hope by a political party? There is nope but it is not from one party the only hope is that all of us as Americans put aside the political bias and stop using the talking points of a political party and find out for ourselves what the real facts are.  Then, we have to be bold and take action even if it runs counter to what our political party is saying.

I have been a lifelong Conservative Republican but have at times I have supported a Moderate Democrat, when they were the best choice. It is time if we really want to save our country from being overrun by those who would enslave us to rise up and get informed. In today’s world, it is very easy to fact check what your political party is saying. So much of the last elections was distorted or fake news so easily checked out but so many are so brainwashed by a political party they don’t fact check, they just accept and believe everything they hear.

Even though the terrorist agenda is very advanced to destabilize us we can still turn it around. If we as millions of individuals become one force for good, we can stop the danger around us. I pray we all will.

Until next time stay safe,